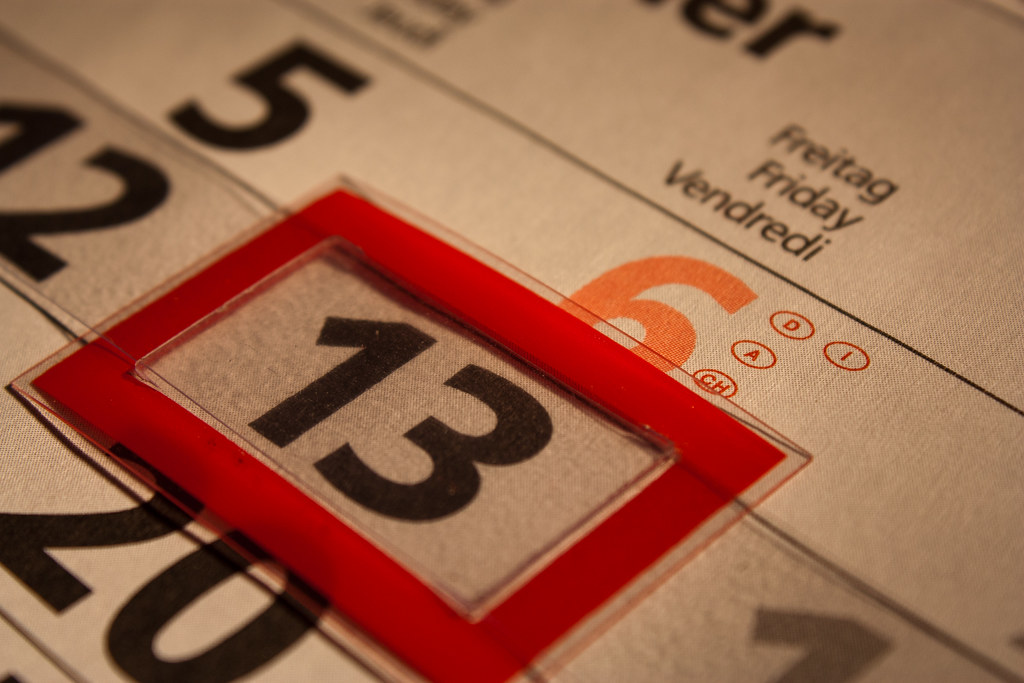 Why the number 13 is considered unlucky? Let’s look at the history of triskaidekaphobia (the fear of number 13) and why people fear Friday the 13.

Recently in Chandigarh, the capital city of the north Indian states of Punjab and Haryana, the residents of Modern Housing Complex in Manimajra area have asked their administrator to name the area Sector 13. Le Corbusier, the French master architect hired to design Chandigarh had not created Sector 13 in the first planned city of independent India due to a western superstition- the irrational fear of number 13. However, Indian belief system considers the number 13 auspicious, as both Lohri and Baisakhi, harvest festivals are celebrated on 13th of January and April respectively.

The fear of number 13 is quite real as researchers estimate that 10 pc of the US population has this fear and even more specific fear of Friday the 13th, which even results in financial loss of USD 800 million annually, as people avoid marrying, travelling and even working on those days. The phenomenon is so widely reported that it has its own name, triskaidekaphobia (the fear of number 13), and the people suffering from this equate 13 with bad luck and misfortune. But why does this happen? The answer lies in between Christian beliefs, myths, historical events and numerology.

The earliest myth related to this phenomenon is Code of Hammurabi, one of the oldest legal documents from the Babylonian civilisation, which omitted the 13th law from its list of legal rules. In reality, the omission was just an error made by one of the earlier translators who failed to note down the line- as the code originally didn’t list the laws numerically.

The most common theory which explains the unlucky 13 is based on Biblical Christianity. During the Last Supper, the final meal Jesus shared with his Twelve Apostles before his crucifixion, Judas Iscariot was the 13th guest at the table. The concept of 13th guest is also found in Norse mythology in the tale of a Valhalla dinner for God Baldur, where Loki arrived as the 13th guest and murdered the God.

The connection between Friday and 13 can also be drawn to the Christian lore as Judas the 13th guest betrays Jesus on Maundy Thursday leading to his execution on Good Friday.

The religious beliefs had been fostering for hundreds of years, when in the Dark Ages the exaggerated accounts of French King Philip IV arresting some Knights Templar on Friday 13, 1307 strengthened the idea.

In late 19th century, Civil War soldier Captain William Fowler founded The Thirteen Club to reject the superstition. He even held the first meeting of the club on Friday, January 13, at 8:13 pm in room 13 of Knickerbocker Cottage on Sixth Avenue and 28th as there was no availability on 13th Street.

In 1907, a novel called Friday the Thirteenth was published by businessman Thomas W Lawson, in which a young stockbroker decided to wreak financial havoc on Wall Street on that day. Again in 1980, Paramount Pictures’ brought out the first movie of their Friday The 13th horror franchise which solidified the myth by adding horror element to it. The franchise has had 12 films and is just one movie away from being true to their name.

According to mathematicians and numerologists the misfortune of number 13 comes from its position in the number sequence after the ‘perfect’ number 12. There are 12 months in a year, two 12-hour half days in a day, 12 zodiac signs, 12 gods of Olympus, 12 tribes of Israel, 12 days of Christmas and the 12 Apostles of Jesus. Following the ‘perfect’ number, 13 seems to be lacking and out of symmetry.

Another theory for the superstition is rooted in patriarchy and sexism. There are total 13 lunar cycles in a year, and in many culture the moon is associated with women. So the number is associated with the female energy and was celebrated in ancient civilisations as the Divine Feminine but with patriarchy rising, it came to reflect the female oppression.

There are many buildings without 13th floor or room numbered 13, airplanes without row 13, no number 13 button in lifts and of course no 13th guest at the table. Even the American author of horror books, Stephen King himself is afraid of the number 13. He skips the 13th step on stairs and doesn’t pause on page 13 or a multiple of it while writing. When reading, he never stops on page 13 or any page that adds up to 13. Mark Twain also avoided being the 13th guest at a table claiming later, “They only had food for 12.”

This year has two Friday the 13th- in September and in December. Be prepared!

How did we lose our independence? If we are descendants of strong women? – How d…